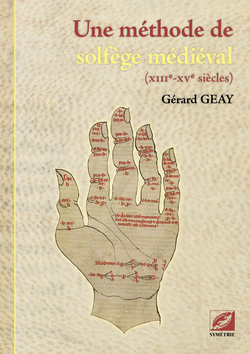 Why publish, in our day and age, a tutor for medieval solfeggio? The question may justifiably be asked. Can one imagine, then, a pianist for example, dedicating him or herself to the repertoire of Romantic music without a sound grasp of the rudimentary knowledge of the solfeggio during that period? This is, nevertheless, the case of many performers of medieval music. Faced with a dearth of pedagogical tools, they have hardly had any possibility to study solmization, modality, notation, musica ficta, counterpoint and prosody thoroughly and in a sufficiently detailed manner.

The aim of this tutor, then, is simply to enable all those musicians, amateur or profes-sional, who are interested in medieval music, to acquire through a series of practical exercises taken from the main treatises dating from the 13th, 14th and 15th centuries, the basis of solfeggio necessary for a historically informed approach — as we say nowadays — to three centuries of European music. The study of the source material of music theory of this period shows an extremely consistent presentation of the teaching methods of this discipline which proves that, if the style of composi-tion evolved indeed considerably in three centuries, the fundamentals of solmization remained the same. These exercises are transcribed in their original notation from which one may solmizate either at sight or, alternatively, using the accompanying analytical tables along with the recording, performed by the singers of the Musica Nova ensemble, which provide working examples. They are preceded by a clear and concise commentary on the theoretical explanations necessary for an understanding of Guido d’Arezzo’s method and completed by several musical examples. The idea is, then, to permit the restitution of these repertoires in the most plausible way possible — the search for authenticity itself being nothing less than utopian — by building on the knowledge brought to us by research.

Based in Lyon, the early music ensemble Musica Nova is comprised of singers spe-cialised in the repertoires of polyphonic music and gathered around Lucien Kandel, teacher at the Geneva High School for Music. Their unfailing interest for research into theory and practical musicology produces unexampled performances on account of their sonorities hitherto quite literally unheard.

In consequence, the ensemble works only with the original sources or diplomatic transcriptions of those sources made by its members — when, for example, the sources themselves are in a bad state of repair — excluding any and all recourse to transcription into modern notation. Taking into consideration the absence of direct transmission of these very early repertoires, all their fundamental parameters, to wit, rhythmic notation, solmization, addition of musica ficta, pronunciation and prosody are all taken into account so as to establish a musical text that is as correct as possible.

This original approach has given rise to several recordings of the monuments of medieval and renaissance polyphony: the mass by Guillaume de Machaut, the Missa Cuiusvis Toni and the Missa Prolationum by Johannes Ockeghem, as well as a number of Chansons by Josquin des Prez and not forgetting the world premiere of 2019, in the Papal Palace in Avignon, of the famous Barcelona Mass (14th century). This recording of the exercises in the present didactic work is therefore simply the logical continuation of the long collaboration with Gérard Geay.

This book is in French.

All exercises were recorded by signers of the ensemble Musica Nova de Lyon. The sound streaming is available through a QR-code printed in the book. As an excerpt, here is the exercise 6-3: