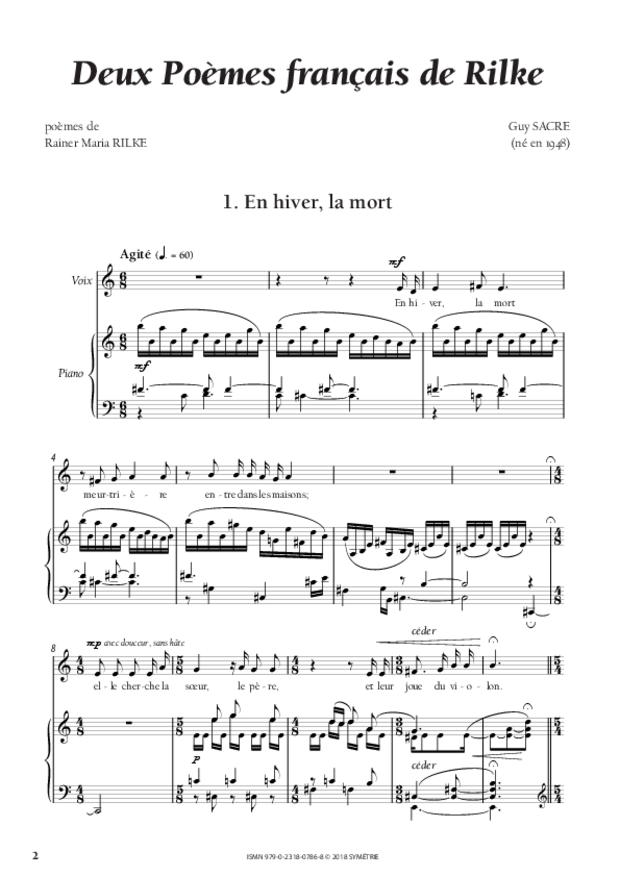 It is not always well known that Rilke, in the evening of his life, wrote a few poems in French. He gave an admirable motive for this in the very middle of his collection Vergers:

Perhaps if I dared write you,
borrowed tongue, it was to use
this rustic name of which the sole empire
had always tormented me: verger (orchard).

That a single word, and one of the most fragile, might lead to a whole exercise should continue to move us. Is it not also, sometimes thanks to a single poem, mysteriously chosen, that a composer suddenly turns into an interpreter and tries to give extra flavour, if not sense, to words however definitive? For this French Rilke, others have done so before me: Milhaud (Quatrains valaisans), Durey, Barber, Hindemith… I don’t know to what, before these pages, they wanted to respond but I can say what held me: the trembling, quite perceptible to whomever lends his ear, of a language indeed ‘borrowed’, and which does not elude (and perhaps does not wish to elude) the folds, the hollows, the strange clumsiness of the foreigner, no less valid, in the hands of such an artist, as the smooth, glossy exactitude of the native – and often laden, like the wrong note in music, with an inexplicable, violent beauty.