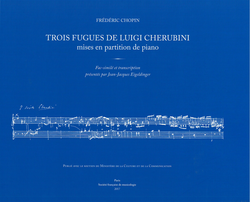 Chopin always paid conspicuous attention to the art of counterpoint. In the early eighteen-forties, he went so far as to immerse himself in Luigi Cherubini’s Cours de contrepoint et de fugue (1832) and transcribed for piano three of the master’s vocal fugues. The autograph manuscript of this transcription—published for the first time in this volume—was long preserved, unknown, in a private collection; it is to be counted among the relatively rare manuscripts that Chopin set down with especial attention to his calligraphy. In the introduction, Jean-Jacques Eigeldinger traces the curious history of the manuscript and considers anew the importance of counterpoint to Chopin, who was immediately intrigued by the subject as a boy, in Warsaw, where his first teachers, Żywny and Elsner, inculcated in their remarkable pupil a fascination with J. S. Bach and with the Well-Tempered Clavier.
The volume also features a number musical examples, illustrations (including portraits of Cherubini and of Chopin at his desk), facsimiles, and transcriptions of further rare contrapuntal studies by Chopin (including counterpoint exercises on given melodies of Cherubini and a fragment of a canon at the octave made in preparation for the Sonata, op. 65, for violoncello and piano). The excerpts from Cherubini’s Cours de Contrepoint that served as Chopin’s models are presented in the appendix.