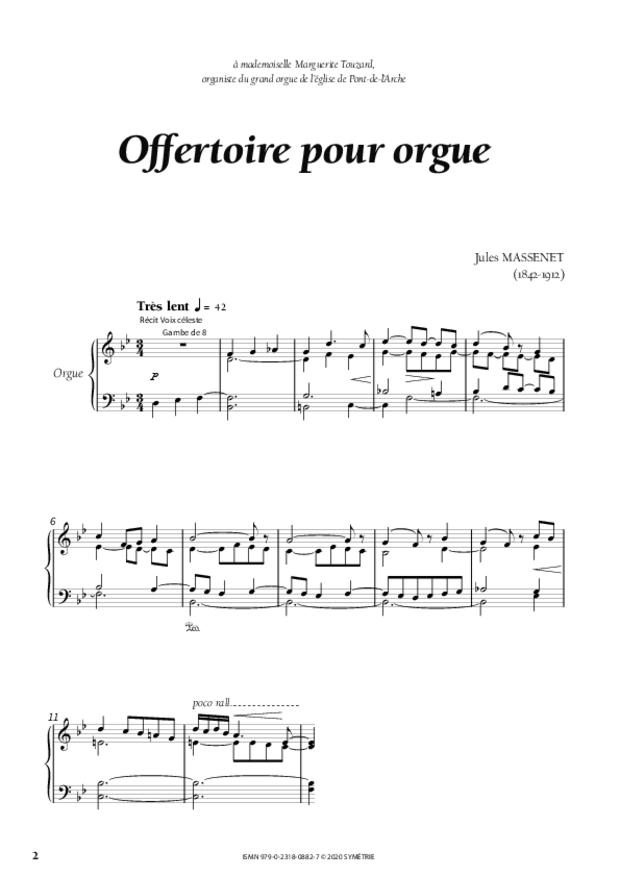 After purchasing a summer residence at Pont-de-l’Arche in Normandy on 10 July 1891, Massenet became friends with Father Henri Hazé, the priest of Sainte-Marguerite-sur-Duclair parish. Born in 1854 in Elboeuf, Father Hazé was himself a musician, “an elevated nature, with a sense of curiosity, a warm heart, very inclined towards Art, and a friend of the beautiful, under whichever form”. With “a very keen taste for religious music”, he published in 1894 a first set of organ pieces by a. o. d’Indy, Guilmant, Vierne and La Tombelle. In parallel, Hazé was preparing a second one, completed short before his death on 28 February 1895, but only published three years later by Henry Eymieux. We found no copy of this set in the public collections, but it was announced in the Revue musicale Sainte-Cécile of 1 July 1898. The biographies of the authors confirmed the possible date of this set including Massenet’s Offertoire: mention of Georges Mac-Maste’s death on 31 March 1898; appointment of Charles Tournemire as titular organist of Saint-Nicolas-du-Chardonnet from December 1897 to May 1898. But its composition was much earlier as the recently found manuscript during an auction in Deauville is dated and signed “Pont-de-l’Arche /summer 1894”. So Massenet composed his Offertoire straight after the publishing of the first set and gave his manuscript to Father Hazé with a view to the publishing of a second set, as proved by that letter dated 15 September 1896: “Do you remember the offertoire written for the late Father Hazé? I have found the manuscript again and give it to you. The offertoire is about to be published.”