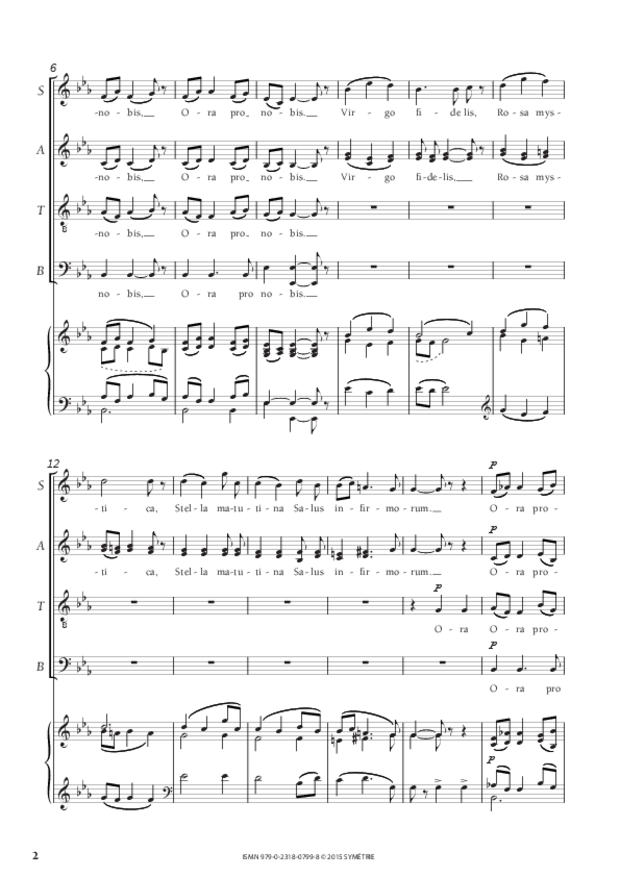 Léo Delibes left his native Sarthe in 1848 to Paris where he studied at the Conservatoire, whilst being a choir boy at la Madeleine church. A few years later, he became the organist at Saint-Pierre de Chaillot and Saint-Jean – Saint-Francois churches before joining the Théâtre-Lyrique then the Opéra as a vocal coach. Delibes enjoyed then a prolific career as a composer of operettas, opéras-comiques or ballets, among which some of them granted him posterity (Coppélia, 1870; Sylvia, 1876; Lakmé, 1883). He was a member of the commission for the singing education in the schools of Saint-Denis and Sceaux, he also wrote many choral works, among which a Messe brève, for children voices or “orphéons.”

In the Durdilly edition, Delibes’ litanies are titled “N.-D. du CHENE (Sarthe)”, a Marian shrine located near Saint-Germain-du-Val where the composer was born. They present a writing for 4 voices, mostly doubled by the organ. The upper voices, maybe meant for children, first singing with restraint (Sancta Maria) before being joined by the male voices (Ora pro nobis). There is an overall atmosphere of devotion and gentleness, as Delibes excluded the Kyrie and the Agnus Dei, usually opening and concluding litanies, so as to enhance the mother figure of the Virgin Mary.