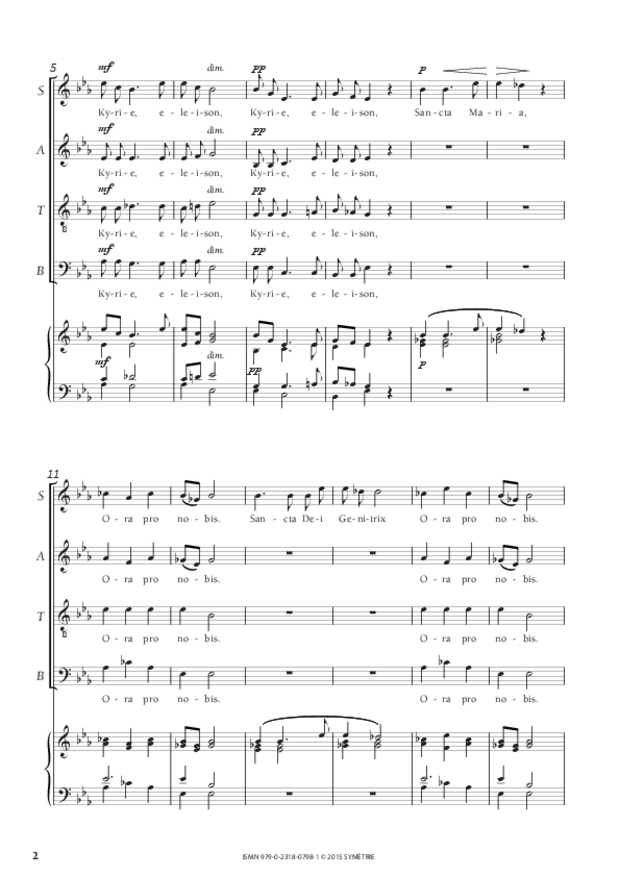 Two words summarize César Franck (1822-1890), a composer often labeled as a church musician: Christian and romantic. Today known for his symphonic music and his works for organ, Franck also wrote a large number of sacred music pieces, topped by the monumental Béatitudes.

The present litany is a late composition at a time when Franck significantly wrote fewer religious music. On the other hand, it can be linked with other pieces (canticles, hymns, etc.) also devoted to the Virgin, and is a counterpart to the motet Domine non secundum, published at the same time in a set “modestly dedicated to our holy Father, Pope” Leo XIII.

The litany perfectly reflects the concision that Franck was forced to adopt for his liturgical production and is divided in two parts: the first is for equal voices on a traditional introductory Kyrie in a very aerial E flat major, whereas the second, centered on the Virgin (Sancta Maria) is more imploring and alternates sopranos with the rest of the choir in the homonym key of E flat minor. The four conclusive bars nonetheless go back to the initial key softening the ascending chromatic soprano line.

In the set of Abbott Grivet, Franck’s litanies are entitled “N.-D. DE FOI (Nord)” probably as a remembrance of a trip made by the composer in March 1888 and during which he inaugurated the Merklin great organ of Saint-Vaast Church in Béthune before going to Liège for a concert entirely dedicated to his pieces a few days later. In between, he might have visited Bailleul Church where there is the statue of the Virgin with the child, known as Notre-Dame de Foy (or Foi, i.e. faith), patron of homes and subject to a special devotion.