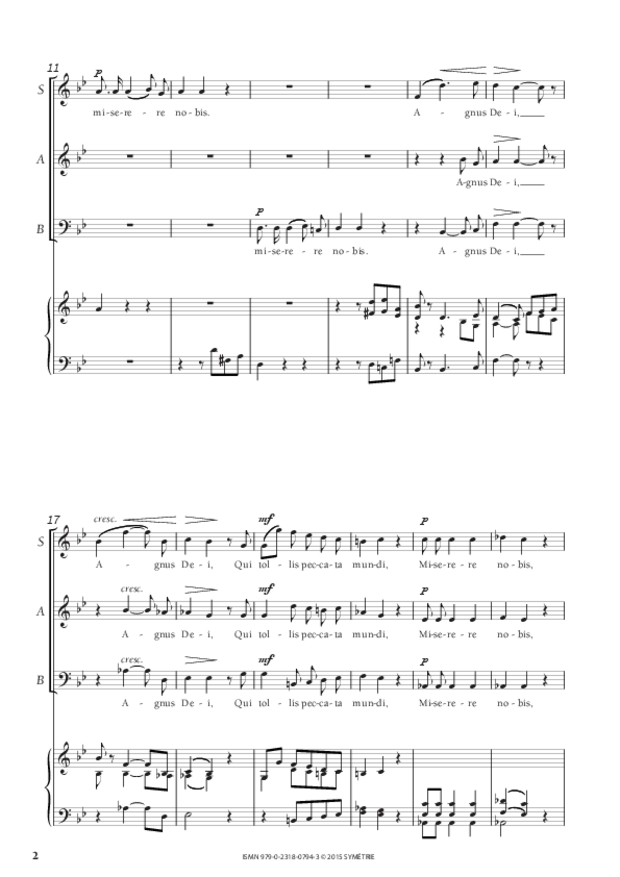 Mostly known for his operas (Mignon, 1866 ; Hamlet, 1867), Ambroise Thomas (1811-1896) also composed about 15 religious works, including some motets, one Messe solennelle (1852) and one Messe de requiem (1833). The Agnus Dei presented here is not listed in the catalogue of the composer’s works, contrary to what Elisabeth Rogeboz-Malfroy states: the Agnus Dei, for tenor and organ, auctioned off in 1935 then in April and December 2013,[^ ^]comes a priori from a Messe de requiem, and therefore does not correspond to the litany published in Abbot Grivet’s collection.

Thomas dramatizes his score by keeping only the concluding Agnus Dei of the litanies’ text, which is written for 3 voices in B flat major and presents an equal treatment of the voices, accompanied by an organ part ad libitum, though sometimes independent. The vocal lines are reminiscent of the composer’s operatic career by their expressiveness and their melodic figures made of large intervals. The musical treatment of the Agnus Dei traditionally contrasts with the more sober Miserere.

The title given to the litany (“À N.-D. DE PONTIFROY [sic] (Metz)”) refers to Thomas’ birthtown, then annexed to Germany since 1870, which would account for the dark and unique atmosphere of the score. More precisely it refers to either the abbey of Notre-Dame du Pontiffroy, destroyed in 1740, either the church of Notre-Dame du Perpétuel-Secours, next to the Saint Clement church in the Pontiffroy area.