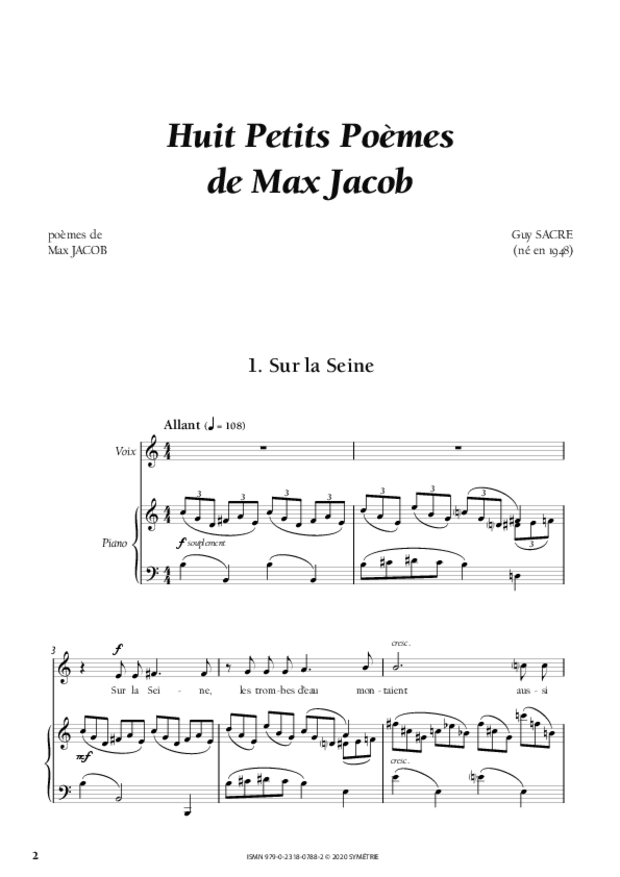 Those who love Max Jacob (are there many of us left these days?) almost always hesitate between these two poles of the poet’s inspiration: the tragic and the humorous – and all the more so given that, in the majority of his works, the two come dangerously close, threatening to throw off balance a universe already fragile in itself and misdirected. In music, nowhere is this contrast better marked than between Sauguet’s Visions infernales and Poulenc’s Bal masqué. For whomever listens to them successively, the author’s identity is an insoluble enigma, unless imagining that this author does his favourite trick every time: precisely advancing ‘masked’ and in the most consonant piece being discordant without warning. In listening closely, Le Bal masqué, for all its comicalness, is no less wounded with painful splinters; and the Visions infernales (like the Pénitents en maillots roses), with all their seriousness of Confiteor, do not reject the prank, the smile, or even mischievousness.

It was because I did not want to separate one of these Siamese twins (the penitent and the clown) from the other that I made the choice of setting to music slim fragments of prose taken from the famous Cornet à dés. I say ‘famous’ although the fama in question has dispersed with the bleak winds of our era. But this collection marked a milestone and can perhaps still charm those who have not completely given up on books, writing or the gratuitous act. Like so many haiku, these eight texts lightly brush or graze reality, leaving us in a quality of astonishment that I would like to call ‘oracular’. A magician (he of the fourth poem?) opens up a world to us in a few words, which he immediately conceals with feigned indifference. I am amazed today that I dared give the time, however fleeting, of a few songs to this weightless, unpretentious art…