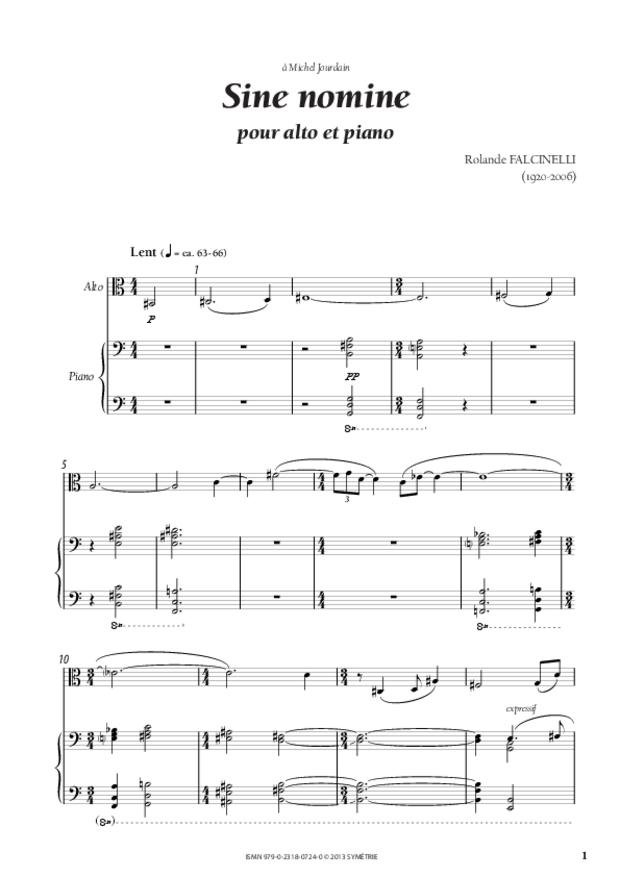 The manuscript of Sine nomine mentions as the date of completion: “Paris, 24/2/1987”. The circumstances of its birth should have led to a radically different result to what we are listening: it was supposed to be a party gift to Michel Jourdain (the organizer of the summer session Rolande Falcinelli held in Belley, as well as many of her concerts in Paris). She gave him the piece, along with some weak joking verses—in fact an acrostick on the title Sine nomine, to justify… the absence of a title! One would expect a joke for a dinner between friends. But one then discovers with utmost surprise a dark even tragic music, unveiling the pessimistic and introverted sides of a personality rejecting the materialist intoxication of a decaying world. The writing is fully representative of her style at that time: a tormented harmonic writing, never resting on serene moments. The generous cantabile of the viola soars in ample arches from the mysterious innermost where the piece was born. The lyricism of this instrument, so much cherished by the composer, spreads out as to float over the chaos.

Sine nomine was premiered on December 19th, 1987 by the composer herself at the piano, with American violonist and violist Jason Meyer, at the Institut national des jeunes aveugles (National Institute for the Young Blind) in Paris. Rolande Falcinelli played on this occasion on a Bösendorfer Imperial, a piano for which she had a strong predilection; it is an interesting clue as to the low and deep colours to be achieved in the interpretation of this piece.