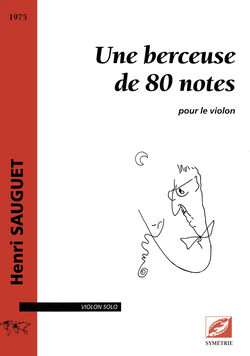 All his life, Sauguet had been in touch with artists of diμerent generations and backgrounds: composers of course, interpreters, choreographers and dancers, poets, actors, painters and decorators, film-makers… He often spoke of his many friendships as constituting, in his mind, a spiritual family, to which he had written many pages of occasion, tributes and testimonies (Prélude à une exposition de peinture, for a premiere at the Rive Gauche art-gallery in 1937; Toast pour Henry Barraud to celebrate his achievement within the French radio institutions ; 80 notes clavecines, written for the 80th birthday of Wanda Landowska).

“The Marquise de Casa Fuerte, Yvonne Giraud, a fellow student of Darius Milhaud at the Conservatoire national where she studied the violin (she won the first prize and was a true virtuoso), came to live with us [Max Jacob, Vittorio Rieti, René Laporte, etc.] at the Nollet Hôtel. She had the genial idea of founding a concert society, that was to perform our music and the ones of the musicians of our time, regardless of styles, as long as she valued them” wrote Sauguet in La Musique, ma vie. During these concerts of “La Sérénade”, among the works of Poulenc, Weill, Markévitch, Prokofiev or Milhaud, many of Sauguet’s compositions were performed, often for the first time: La Contrebasse, La Voyante, Fastes, Polymètres, Les Jeux de l’amour et du hasard, Petite Messe pastorale… Yvonne de Casa Fuerte was forced to leave Europe at the beginning of 1941 for the USA; she played as a violinist in a New-York orchestra. After the war she returned to France and worked for the American Cultural Centre and the US Embassy.

On her 80th birthday in January 1975, Sauguet dedicated her two pieces for solo violin, Berceuse and Romance, as the far echoes of the concerts of “La Sérénade”.