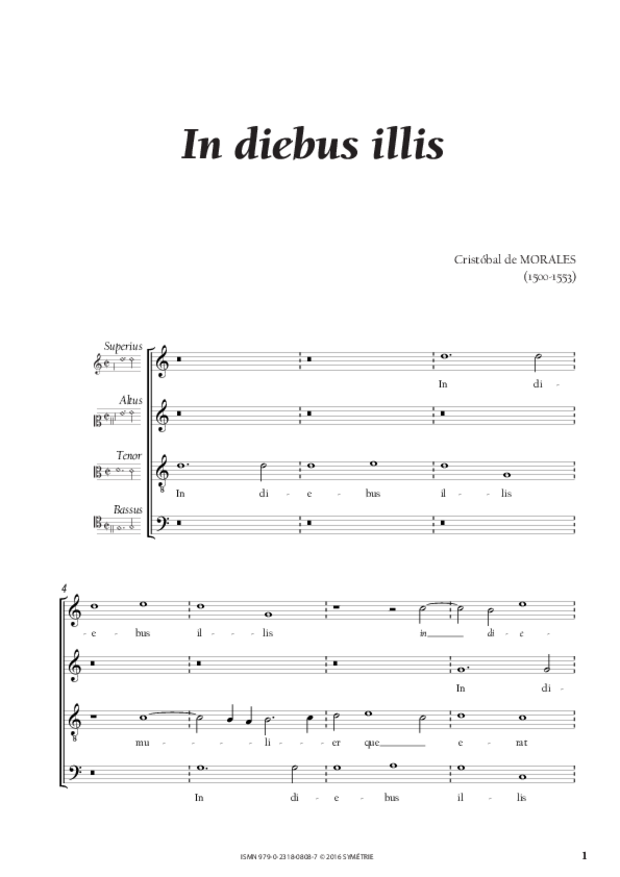 The source of this publication is the manuscript 5 from the Cathedral of Valladolid, which contains the only (anonymous) vocal copy of the motet In diebus illis, unlisted in the composer’s catalogues. It has been attributed to Cristóbal de Morales thanks to the concordant version found in an important instrumental source, the Arte novamente inventada by Gonzalo de Baena, published in Lisbon in 1540, which makes it one of the first vocal pieces of the composer. It is written in a dense imitative style, announcing his later works, and therefore constitutes a much representative example of the music composition in Spain in the 1500s-1530s.

The text is about the moving episode of the meeting between Christ and the “sinner” Mary Magdalene, after which the former repents her life of pleasures and implores Christ’s forgiveness by washing off his feet with her own tears. The musical illustration of the text results in the enhancement of images evoked either through musical rhetoric skillfully exploited, or particular techniques of polyphonic writing.

In the second section, the splitting of the quartet in limited vocal ensembles, generally of 3 voices, are as many examples of musical textures contrasts, in the manner of the Franco-Flemish style, “alla Josquin”. The final phrase of the piece is a thoughtful apotheosis reflected through the use of all voices without any vocal fragmentation and of ever longer values, with a carefully extended ending.

In this motet, words match the musical idea, following in this the model established by Escobar and Peñalosa, two composers linked with the Cathedral of Seville, whose influence on Morales is clear and perceptible. The writing closeness of this motet with those of the contemporary Franco-Flemish composers does not preclude its belonging to an Iberian tradition strongly attached to textual declamation. Finally the complexity and the discipline of Morales’ musical speech originate not only from his technical abilities, but also from the composer’s level of abstraction and capacity of description.